The Ithaca Ale House opened its doors on May 7th, 2006, and owner John O’Leary says they’re “celebrating our 15th birthday with an update on our plans for expansion into a brand new space in the City Centre building in Downtown Ithaca.”

O’Leary originally planned to open the Ithaca Ale House’s new location in 2019, but “we experienced setbacks including some redesign and budget issues” as the building itself was completed on schedule, and then “as we worked to rectify all the issues, COVID-19 came upon the world and everything stopped.” 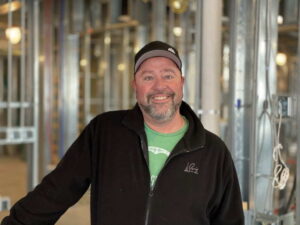 John O’Leary inside the future home of the Ithaca Ale House, still under construction. 14850 Photos by Mark H. Anbinder.

After 2020’s challenges, “we worked very hard to get back on track with the new Ale House project,” O’Leary says. “Thankfully construction was able to resume in March of this year and we are looking to be opened at City Centre in late summer.”

“The Newman Development Group has been supportive of this project since the beginning,” said Marc Newman of the Newman Development Group in a statement. “We were thrilled to incorporate a local business into our project and it’s even more rewarding helping that business expand. We are excited and anticipating the completion as we feel it will be a perfect addition to City Centre and Downtown Ithaca.”